5G: Coming to a City Near You?

Telecommunications giants are racing to implement fifth-generation wireless technology. In fact, U.S. carriers are expected to invest more than $100 billion in 5G infrastructure between 2018 and 2020, according to research from the GSM Association. However, these implementation efforts will not facilitate blanket nationwide coverage, as well as, have the carriers pursuing different 5G strategies.

AT&T and Sprint have focused on deploying mobile 5G for handsets. This follows a strategy that was deployed only several years ago when the networks were upgraded from 3G to 4G. Standing out from the 5G mobile strategy is Verizon’s ambition to compete directly with cable companies with high speed cellular broadband internet over 5G for businesses and homes for fixed locations. Verizon has already announced plans for their “5G Home” internet service at $70 for non-Verizon customers and $50 for Verizon mobile customers. T-Mobile is taking a blended approach to its 5G buildout. T-Mobile has announced that they will have mobile 5G in 30 cities in 2018; however, they have only named 4 cities specifically. Simultaneously, T-Mobile is focusing on building a 5G cellular broadband product, having announced plans to compete directly with the cable companies, looking to gain 11 million 5G broadband customers by 2020. These different strategies have impacted which cities each carrier has identified for 5G service.

Can residents in the cities expect to access lightning-fast download speeds via their mobile devices any time soon? No. all carriers are rolling out stopgap solutions with expanded 4G LTE-A service that will allow users to take advantage of connections that are faster than those currently available through traditional 4G. However, newer 5G mobile networks will require new hardware. AT&T will distribute hotspot devices that support 5G connectivity, while Verizon is pursuing so-called fixed 5G installations, BGR reported. These fixtures facilitate fifth-generation home internet via local millimeter-wave connections. Sprint is deploying multiple-input-multiple-output antennas that deliver connections near 5G speed but not quite, according to The Verge.

Full 5G coverage is not expected to materialize for another two years, as carriers must roll out mobile devices that support fifth-generation connectivity and finish constructing the high-density networks needed to support such service. That said, a significant portion of the population will be able to get a taste of 5G over the next six months or so as the city-based test deployments mentioned above go live.

Here are the U.S. cities that carriers have announced fifth-generation coverage for as part of initial 5G rollout efforts through 2019 as of Sept 30, 2018: 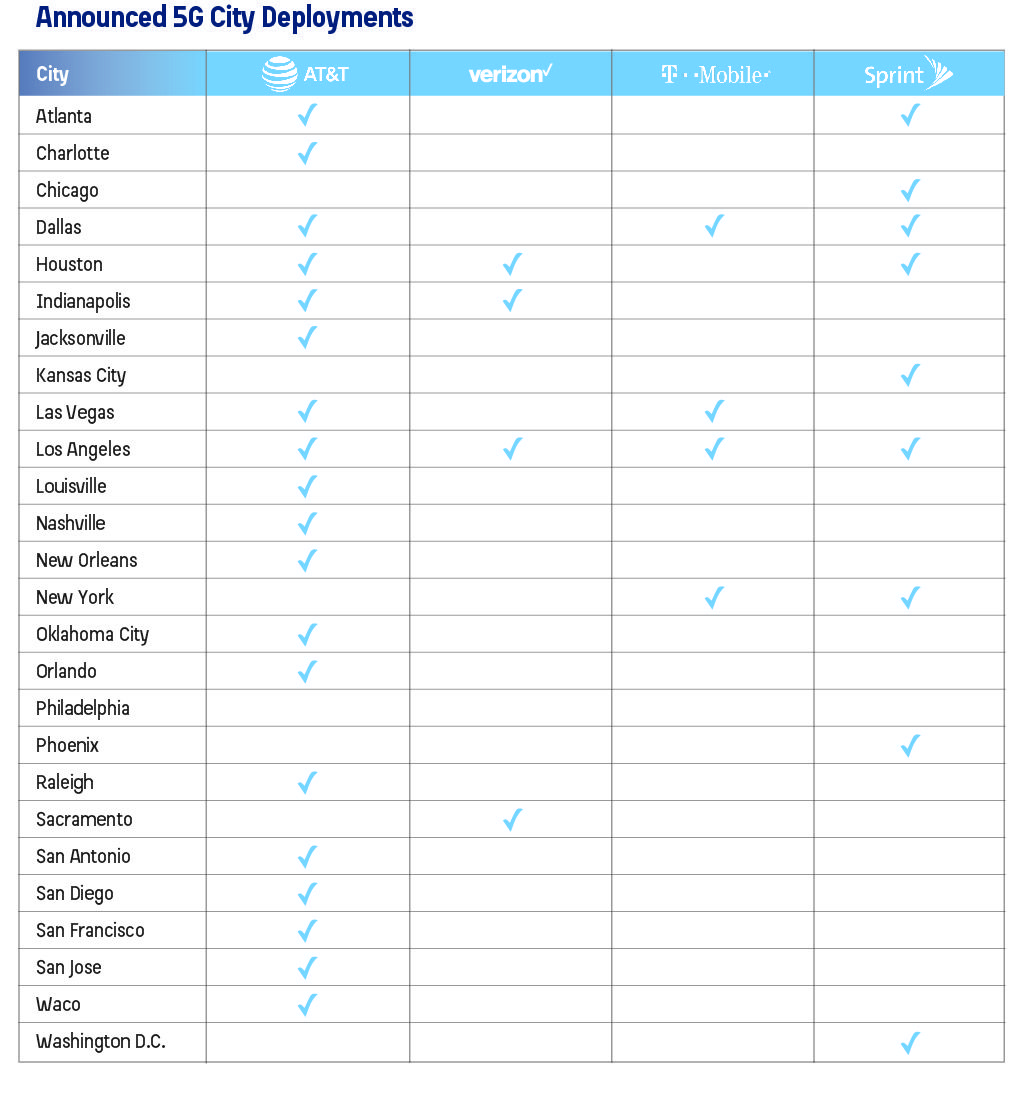 Both AT&T and Sprint, which is working through approvals for a merger with T-Mobile, have committed to installing 5G infrastructure in Atlanta, Bloomberg and VentureBeat reported. Why are these big carriers so interested in Georgia's capital? The city boasts a diverse business community that includes multiple Fortune 500 firms, as well as a number of burgeoning startups, according to VentureBeat. It is also home to the media conglomerate Turner Broadcasting, which owns and operates CNN. Atlanta also has the second-lowest mobile tax rate in the country and maintains an 8 to 10 device-to-resident ratio, making it one of the most mobile-friendly cities in the country, researchers for NerdWallet found. This environment will serve as an ideal testing ground for 5G network technology, which could transform consumer and enterprise networking at every level, when mature.

This north Texas commercial hub is at the center of AT&T and Sprint 5G deployments - and for good reason. Dallas maintains a massive mobile market and plays host to hardware and software providers that might accelerate 5G infrastructure development, The Dallas Morning News reported. Telecommunications equipment giants Ericsson and Huawei maintain headquarters in the city, along with electronics innovator Texas Instruments. Of course, AT&T itself calls Dallas home, as well.

The largest city in Texas ranked among the top 10 most mobile-friendly metropolitan areas, according to NerdWallet. The reason? Houston has maintains an abnormally high mobile device store density, boasting almost five retail locations per 10,000 residents. Additionally, the city offers a number of residential services delivered via smartphone, making connected assets essential to daily life in Houston. These variables prompted both Verizon and Sprint to include the city in their initial 5G rollouts, VentureBeat reported. On their own, Verizon plans to invest more than $100 million in Houston's developing 5G infrastructure.

The second most populous metropolitan area in the nation will host 5G network technology from Verizon and Sprint. The business and cultural climate make Los Angeles the perfect candidate. However, the small enclave of Long Beach perhaps holds the most technical potential due to its modernized, mobile-based residential services and faster-than-average download speeds, which rank in the top six nationwide, NerdWallet reported.

Rounding up the 5G rollout announcements are the strategies of launching in some smaller metropolitan areas. Neither Sacramento nor Waco seems suited for exploratory technological development. In reality, this is simply not the case. AT&T has been conducting small-scale 5G trials in Waco for some time, according to the Waco Chamber of Commerce. Expanding these efforts was the obvious next step. Surprisingly, Sacramento is among the most mobile-friendly cities in the U.S, ranking analysts for NerdWallet attribute to the local government, which spearheaded a mobile-readiness initiative between 2013 and 2015. Today, mobile applications help residents access critical services. This effort led Verizon to select Sacramento as its first 5G city and establish a $100 million partnership with city hall, the Sacramento Business Journal reported.

The two North Carolina cities included on this roster -- Charlotte and Raleigh -- are leveraging their strength in the technology sector to gain access to the 5G build-out. Charlotte is home to several multinational firms and has recently transformed into an international financial capital. These variables alone led Verizon and Sprint to pursue 5G projects in the city. Raleigh, home to the famous Research Triangle Park, is the largest industrial research facility in the country and one of the biggest in the world. The city has also received attention from technology giants Amazon and Apple. The Seattle-based e-commerce company has shortlisted Raleigh as a possible location for its second headquarters, an idea analysts for Attom Data Solutions found compelling. Apple, on the other hand, has committed to making the city the home of its second headquarters, Quartz reported. Together, these variables made the city an obvious candidate for AT&T and its fifth-generation wireless pursuits.