What 5G means for Businesses

Considerable hype surrounds fifth generation wireless technology - and for good reason. This innovation has the potential to transform modern communication, giving broadband device users access to never-before-seen data transmission speeds. Some technologists believe 5G networks could transport information wirelessly at an astronomical pace of 10 gigabits per second, according to Wired. Both consumers and businesses are clamoring for 5G as a result.

For enterprises, such fixtures could translate to the bottom line, giving product development and operations teams the ability to cultivate streamlined backend workflows and create more robust customer experiences. Businesses in the service industry are among those most interested in 5G, analysts for Ericsson discovered. An estimated 82 percent of financial services organizations intend to pursue the technology in the near future, along with 78 percent of retailers. In fact, a vast majority of these enterprises are looking to roll out products and services centered on fifth generation wireless fixtures within the next three years.

Grappling with the fifth generation

Before businesses in the service industry can embark on 5G implementation, the technology has to develop further. Of course, getting the fifth generation networks into an actionable place is no easy task due to various technological complications. 5G installations harness the power of the millimeter wave spectrum, the high-frequency segment of the wireless spectrum sitting between 30 and 300 gigahertz. These high-frequency waves are capable of moving massive amounts of information at accelerated speeds. However, they do not penetrate physical barriers as effectively as low-frequency waves, nor do they travel as far. To solve this problem, carriers must craft high-density cellular networks consisting of miniature antennas.

Building this kind of infrastructure takes considerable time, as implementation teams must navigate local, state and federal zoning regulations. Some are even receiving backlash from community members who do not want antennas cluttering their streets, The New York Times reported.

Despite these obstacles, telecommunications firms are moving forward with 5G initiatives at an invariable pace. Just last month, AT&T announced that it had added Charlotte, North Carolina; Raleigh, North Carolina and Oklahoma City, Oklahoma to its initial roster of 5G coverage areas, which previously included Atlanta, Dallas and Waco, Texas, according to Reuters. Sprint, T-Mobile and Verizon Wireless are pursuing similar programs, all of which promise to facilitate consumer-grade 5G by the end of 2018.

However, a good number of these initial offerings will unfold with the support of 4G LTE networks, which will be available for use for customers in areas with spotty or nonexistent fifth-generation service.

By 2020 carriers will have formalized 5G products and services in place for both businesses and consumers. Within three years of this date, analysts expect the number of global 5G broadband customers to surpass 1 billion, researchers for Ericsson reported.

Companies such as Qualcomm and Intel are developing the 5G modems that will power the smartphones, intelligent home devices and numerous other form factors poised to catalyze this growth, according to Tom’s Guide. 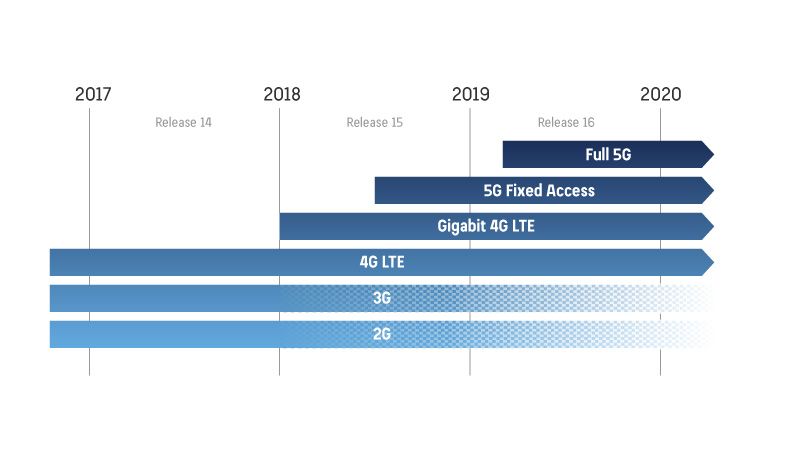 Organizations in the financial services sector are excited about the emergence of 5G due to the prevalence of digital banking. An estimated 66 percent of U.S. consumers primarily access their accounts via digital channels, according to research from the American Banking Association. Fifth generation connectivity would likely lead to an increase in adoption, allowing banks to move forward with branch optimization efforts. A number of high-profile financial organizations have embarked on such programs in an attempt to cut costs. Branch construction expenses have soared over the last four years, rising from $440 to $570 per square foot, analysts for Bancography found. Banks hope 5G will facilitate the online service improvements needed to convert branch-patronizing holdouts into digital customers.

In addition to the direct benefits stemming from use cases such as these, enterprises in the service industry could see ancillary advantages linked to 5G deployments in other sectors. For instance, fifth generation networks are expected to further accelerate the development of smart factory technology, facilitating the creation of responsive manufacturing and distribution workflows that position sellers for success, Huawei reported.

The transportation industry will also benefit from the emergence of 5G, lending autonomous vehicle developers the bandwidth they need to perfect self-driving cars and ease movement and, more importantly, improve safety. In fact, transportation analysts for McKinsey and Company believe such vehicles will reduce traffic accidents by as much as 90 percent when fully developed. Safer and more efficient traffic patterns only benefit companies in the service space, increasing activity in brick-and-mortar locations and laying the groundwork for sales.

In the end, the widespread, cross-industry adoption of 5G technology could transform local and regional economies. For instance, officials in Sacramento, the site of one Verizon’s first 5G deployments, expect fifth-generation data service to lure startups to the city, Comstock’s reported.

As carriers crystallize 5G deployment best practices and ready their initial product offerings, service businesses look on, charting how they might deploy enterprise-ready services. While the timeline for availability may be uncertain, the transformative potential that comes with this technology is not. Companies interested in fifth generation wireless infrastructure should start identifying reliable partners capable of assisting with deployment when the time comes.

Here at Ventus, we have been helping organizations of all sizes weather technological change for more than two decades, providing networking hardware, software and services that bolster enterprise communication and generate return on investment. Contact us today to learn more about our work.